The second-to-last leg of our Great British Adventure was in Scotland.  In many ways, I wish we had spent more time here.  I definitely fell in love with this part of the world, and am in strong danger of deciding to move here.  I know this is not a decision one should make in summer.  I would need to experience a winter this close to the arctic before I decided I would love it.  Also, the glamour of travel would probably wear off and I would begin to find what is charming now to be depressing.

Living in the deep south of the United States, but having grown up in more temperate climates I found the Scottish climate to be an exciting break from my heat-filled life.  South of Hadrian’s wall we encountered a record-breaking heat wave, so the cooler temperatures of Scotland were very exciting.

We started our time in Scotland actually just south of Scotland in Northumbria.  Here we stayed in the town of Haltwhistle and spent a day hiking along Hadrian's wall.  One of my goals for the trip was to see ancient sites, this was the first truly ancient site I managed to visit. I foolishly twisted my ankle on this hike, which made the rest of the trip a tiny bit less fun, but I didn't let it stop me.  We hiked for about 5 hours in very unusual heat (record-breaking heat, in fact).  The museum we went to at Housesteads Roman Fort had a surprisingly large collection of roman ceramics.  The landscape was incredibly beautiful as well.

From Northumbria we drove to Edinburgh where we stayed with an old college friend.  It was wonderful having a local to guide us around the city.  She lives next to the zoo, so we had several lovely walks in the park around the zoo. We also visited the Royal Botanical Gardens, and Edinburgh Castle.

One of the things I enjoyed most about our trip was interacting with locals.  In Edinburgh, my friend’s family taught us some Scottish dialect (for instance apparently “dreich” is a word used to describe gray gloomy weather and things that remind one of gray gloomy weather). I apparently am in a mind frame that finds dreich to be very appealing; it would seem we have too much sun in Savannah, Georgia. My friend helped me get in touch with Cyan Clayworks and arrange to meet one of the artists that works there. The studio was started by Fiona Thompson and Chris Donnelly, I got to meet Chris. We spent a long afternoon boring my husband and friend by talking excitedly about all the ceramic things we were interested in.  The studio was smallish, but has enough space that they hold classes and hosted American artist Elizabeth Kendall as a resident last year.  Chris primarily slip casts his work, and even has a plaster lathe for making prototypes. Fiona works in red earthenware and does a lot of surface decoration with slips and prints.

After we left Edinburgh, we drove north to the area around Inverness, where we stayed in the town of Beauly, very close to Loch Ness.  We visited Urquhart Castle, and went for a walk through the woods that took us to the shores of the lake.  Loch Ness looks pretty much like any other northern lake I have been to, but with castles.  From Inverness, we went even farther north, all the way to the northeastern tip of Scotland.

What led us that far north was a place called Northlands Glass in Lybster.  It was one of the locations I looked at to potentially learn something about glass casting.  That didn’t work out, but I did get a tour of the studio from Grace MacBeath, whom I had been corresponding with about a potential workshop.  The facilities are impressive, and the location is beautiful.  When I have learned more about working with glass, I will try to go back there.

The north coast of Scotland was probably my favorite place we visited. We got to see some ancient stones, and more importantly, lots of subarctic plant and animal life.  The area around Thrumster is full of ancient constructions.  So much so that the family we were renting our cottage from even had an iron age broch in their yard.  If was a bird watcher, I would have been very disappointed that I did not have a telephoto lens with me.  Duncansby Stacks (the most northeastern point of Scotland) had a huge colony of seabirds. The sound and smell was intense.   I wish we could have been there longer; 3 days was just not enough to get to do everything I would have liked to do.  While we there, I learned about the North Coast 500, which is a drive that takes you all along the north coast of Scotland.  Some day we will return to experience that.

Video of the bird colony at Duncansby Stacks.  Make sure the sound is on to get more of the full effect.  I wish I could add smell-o-vision  as well to give the full experience.

We ended our trip with a 2-day drive to London, with stops in Perthshire (Dunning) and Rutland.  In Rutland, we made a quick stop in Uppingham to see the Goldmark Gallery.  This gallery has created a very impressive series of videos about the artists they represent.  I have been watching the videos for years and felt I ought to see the gallery as well.  Coincidentally they were having an opening when I got there, so I got a chance to spend some time chatting with Devonshire area ceramic artist Nic Collins.  Both of us were a little shy, but it was still a good chat.

In London, we spent a day at the Victoria and Albert museum.  I knew from watching posts from friends that this would be an amazing place to see ceramics, but nothing could have prepared me for how overwhelming the ceramics collection there is.  All I can say is give yourself a couple of days for this place.  I am not a city person, so I’m not all that sad that I missed many of the touristy sites around London. I got to see Tower Bridge and the Tower of London from the cab, and we had a good long walk through Hammersmith and Kensington. With the proliferation of American corporations around the world, it was slightly hard to tell I was in a foreign country; it could very easily have been New York.

In all, this trip was an amazing experience.  Since returning home, I have been trying to pretend I am still there by watching as much British television as possible, and taking afternoon tea when I can. Tea just isn’t the same in this hot, humid climate, though. Hopefully I will soon have a plethora of artwork inspired by this voyage to be writing about.

How I mix my slip.

How to: Cover a leather hard piece with wax resist. This technique ony works well on leather hard clay, too wet and the wax takes too long to dry, plus you risk squishing your piece, too dry and the wax will flake off as you are drawing.  In the video I am using Forbes wax which I find to be the easiest to work with for this technique.  It dries fast and is slick, not sticky when it dries.  I have also used Mobile Acer wax, but I find this too sticky to work with happily. Once the wax is dry use a sharp tool to incise your design.  In the video I am using a needle tool because it creates the line width I wanted for this particular drawing.  I have used many different tools depending on what line weight I want, from an X-acto knife to a nut pick.  Anything that will smoothly cut through the wax will work.  Make sure you have cut all the way through the wax or you will lose that part of your drawing. Once you are done cutting, coat the piece in the color of slip 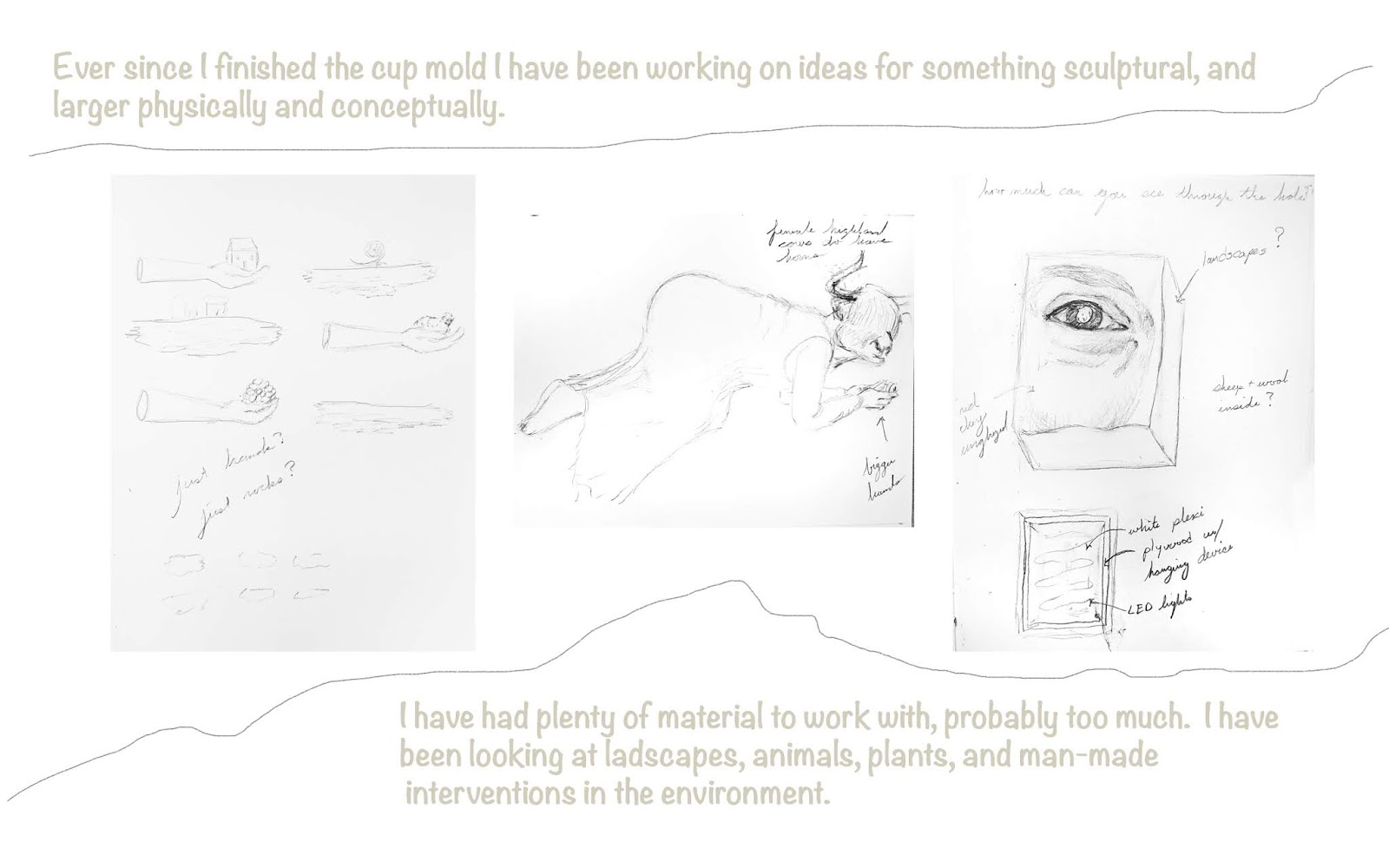 A slow slog to a new creation

At this time last year I was in Scotland gathering material to make new work.  After a severe case of artists block, and then a following glut of too many ideas, I have finally started to make the new work I was hoping for in my last post.  As has been true for me most of my life Spring seems to inspire me to create. One of the first experiences we had on our trip was hitting a pot hole on a very rural road and getting 2 flat tires.  Because we were so far out in the country phone service was very spotty.  To get in touch with the tow company that had our rental car I had to climb to the top of a hill in the rain and sit on hold for a long time.  I was of course pissed off at the situation and feeling kind of miserable and negative about the whole trip.  While I was standing there I started looking at the plant life in the fields around me and saw a fern coming up out of the ground.  That was the first moment I felt like I was developing an idea.  I started to feel more